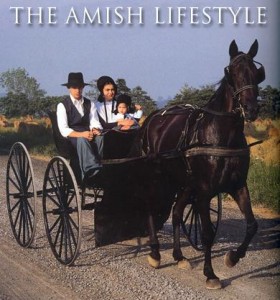 The horse-drawn buggy is the best known symbol of the Amish to curious Englisher, Yankee or High People (names given by the Amish for anyone who is not Amish) who stare at them from passing cars and tour buses. Known as the plain people because they wear plain colored clothing, they live in scattered farmland locations across America.

The Amish — who speak Pennsylvania Dutch among themselves — live within highly personalized relationships, avoiding more than casual contact with strangers who might attempt to educate them to the ways of the outside world. While the Amish avoid most of the conveniences of the 21st Century, something that most outsiders have difficulty understanding, they are happy in their way of life.

The Amish originated from the Anabaptist movement of the early 1500s in Switzerland. Jacob Amman, who believed in conserving traditions and separation from the world more than the other Anabaptist, led a split from the Swiss “Mennonite” Brethren in 1693.

Since the early 1700s when they first arrived in Pennsylvania as part of William Penn’s “Holy Experiment,” the Amish have been living a simple lifestyle in accordance with their religious beliefs. 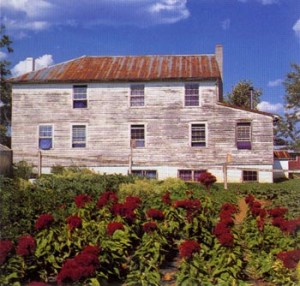 There are approximately 250,000 Amish in North America. The largest group is in Holmes County, Ohio, with significant populations in Pennsylvania, northern Indiana and Iowa. Others are located in the eastern and mid-western states and Ontario, Canada.

The Amish of Lancaster, Pennsylvania, are perhaps the best known because of the many tourists who visit the area and the movie, Witness, which was filmed there.

The Amish are primarily farmers. Some, however, are carpenters and cabinet makers, blacksmiths, buggy and harness makers, all geared toward supporting the Amish lifestyle. Because farmland is expensive, and becoming increasingly scarce, some younger members have taken jobs in nearby factories and restaurants. Others work in general stores that provide the Amish community with goods necessary to their lifestyle that they cannot produce themselves.

In reality, the Amish lifestyle is very much like that of the Englisher ancestors of a century or so ago. 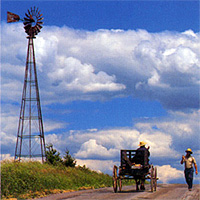 Their neat Amish farms, without electric and telephone lines, look very much like those of the Englishers around them. The houses are comfortable structures with numerous rooms to support typically large families.

Many of their conveniences were used in America’s 19th Century or earlier houses. Wood or coal fueled stoves provide heat. Cooking stoves are powered by propane, kerosene or wood. Kerosene or clear gas lamps provide light.

A distinctive feature of America’s Amish country is the windmill, used to pump water for house or farm use. While some also use gasoline engines to operate pumps with pressure tanks to provide running water for bathrooms and kitchen sinks, the old fashioned hand pump is still used in many houses.

Some use kerosene-fired water heaters. Others run a system of pipes through the kitchen stove (fired with wood, kerosene or propane) to obtain hot water for kitchen or bathroom use. 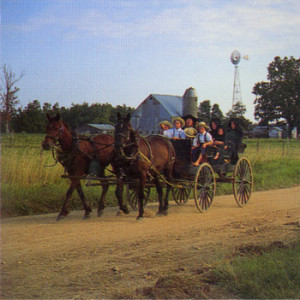 Those lucky enough to have natural gas on their property will use it to heat their house, provide hot water, fuel their refrigerator and provide light at night.

Colorful flowers brighten the ever present “kitchen gardens”. Quilts decorate bedrooms while calendars with scenic pictures, meeting the requirement of utility, cover many of the walls of their houses.

The Amish people do not pose for pictures because they believe that photographs violate the biblical teaching against making graven images (Exodus 20:4). Also, they are concerned that pictures will promote self-pride. They may put their hands or hats over their faces, look away or take evasive action to avoid having their picture taken.